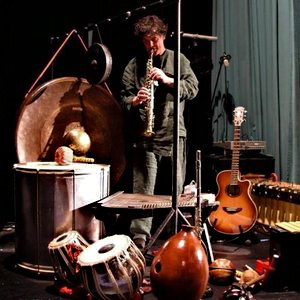 ‘In the Shadow of Trees’ at the Royal Exchange Theatre, Manchester.

After touring with bands for eleven years, Chris was drawn towards visual theatre where he felt that his strengths, and what interested him as a musician, lay in creating atmosphere with sound. Using an orchestra of percussion instruments from around the world, but principally from Africa, Brazil and India, along with guitar, oud, bamboo and metal flutes, saxophone, keyboards, xylophones, voice, sampling and digital technology, he began to explore the worlds of theatre and dance. 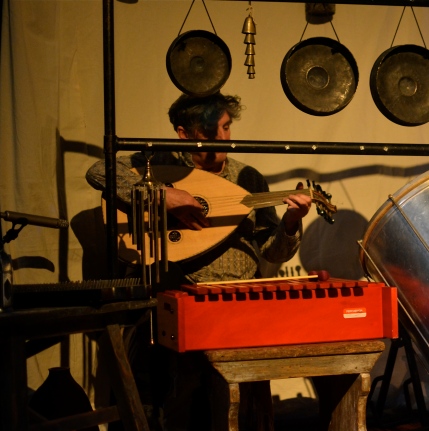 ‘Spring Reign’ at The Lowry, Manchester.

He has recently composed and performed live music for ‘Spring Reign’ a powerful play about the effects of war on a family in Aleppo, Syria. As well as incidental music throughout, his main work was to animate four folktales and underscore monologues given by the four main characters. The production was two years in the making, premiered at Theatre in the Mill, Bradford and The Lowry, Salford, Greater Manchester and is due to tour nationally in 2016.

“Chris Davies’s music composition and playing was an integral part of the play ‘Spring Reign’. His work in the rehearsal room was considerate and inspired, sensitively adding layers of atmosphere and emotion to each moment and expression we explored, building a comprehensive and confident score for the whole of the play. His skilled playing and singing during the performances was extremely moving, and gave the show an authenticity and beauty that affected the audience and the performers deeply. He is a pleasure to have as part of a team, being a great judge of what is needed to lift a scene, or what needs to be left alone and given space to breathe. He is also a great asset when it comes to energising and motivating a group with his fantastic warm-ups.”

Baby Boo is a project by Horse and Bamboo Director Alison Duddle which provides exciting sensory productions using music, theatre, explorative play and materials for all the senses for parents and their babies and young children. Chris has been musician, composer and performer in the last two productions ‘Babies in Space’ and ‘Garden Boo’. 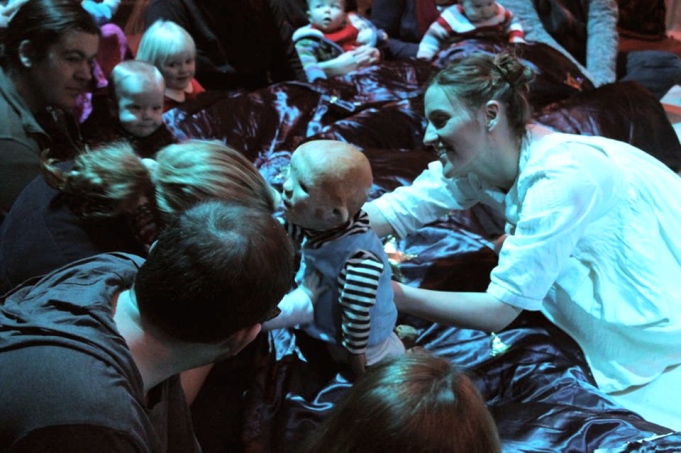 Luna Baby Moon meeting everybody before going on an epic journey into space, with performer Sonya Moorhead and astronaut Chris Davies.

For twenty years Chris has been involved with the unique mask and puppetry company, Horse and Bamboo. He’s one of their resident Musical Directors and has been involved in productions: ‘The Legend of the Creaking Floorboard’, ‘The Girl Who Cut Flowers’, ‘Storm in a Teacup’, ‘Botany begins at Home’, ‘Early one Morning’, ‘The Nightingale’, ‘The Horse’s Tail’, the award-winning ‘In the Shadow of Trees’ and four immersive, multi-sensory guided imagery projects for children with special needs.

“Why do we keep asking him back? Well, because he always gives us something extra special, something quite unique, both as a composer or a performer.

He’s a pleasure to work with. Intuitive, warm and with a great ability to empathise with an audience, Chris will feel his way into a situation, relax a group or audience when it’s necessary and then create memorable and always appropriate music. Long may this partnership survive!”